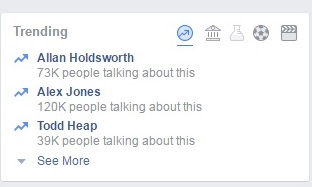 This was not what I expected to see when logging into Facebook on Easter Sunday.  As soon as I saw Allan Holdsworth’s name in the “trending” section, I knew something was up.  I had the exact same feeling when I saw Charlie Haden‘s name listed in the same spot a few years earlier.  I knew another great musician had left us.

He was the ultimate guitar player’s guitar player.  A truly unique voice amongst the millions who have picked up the instrument, inspiring several to do so in the first place, and even (unfortunately) causing some to quit due to a sudden sense of inferiority.  I find it a bit unfortunate that as I see him eulogized online, he gets labelled along the lines of “Eddie Van Halen’s Favorite Guitarist” or “Without Allan Holdsworth, There would be no Eddie Van Halen”.  Anybody familiar with Allan’s work knows that it should stand well enough on it’s own without the need to shoehorn a household name into the conversation.  That’s probably more of my issue with more mainstream press and their handling of more obscure celebrity deaths in general.  I don’t mind if they list of a number of players that he influenced, but to focus too much on the Van Halen angle doesn’t really say who he was or how he sounded.  At least several media outlets found his passing to be newsworthy, which I’ll take over the alternative any day.

When I first heard about him, it was through a special issue of Guitar World magazine focusing on the Top 100 Guitarists of All-Time or a similarly titled feature.  He was one they selected, and listed his 1985 album Metal Fatigue as his essential album.  Based on the title, I imagined him to be some form of speed metal shredder without having ever heard or seen the man.  I suppose you could consider what he did as proto-shred due to his influence on guitar-based music.

Though he may not fall into categorization of what some consider to be “shred” music (most may think closer to someone on Mike Varney’s Shrapnel Records label), his influence seems to fall quite heavily in metal music.  Look towards parts of The Dillinger Escape Plan’s Calculating Infinity or some of Meshuggah guitarist Fredrik Thorendal’s fluid leads to see how his influence spread into unexpected directions.  I’d say that Allan Holdsworth and Al Di Meola are neck and neck when it comes to the most cited jazz/fusion guitarists who inspired those in the metal community.

However, unlike some of the shredders that broke out in the late 80’s and beyond, Allan left plenty of breathing room in his songs.  I’ve heard him in interviews state that he built his composition as vehicles for improvisation, which would explain their open structure.  While still the undisputed master of ceremonies on his own albums, those who listen gain great appreciation of those who surround him, be they Gary Husband, Jimmy Johnson, or Alan Pasqua, to name a few.

I’ve appreciated his work ever since first hearing him play, but it didn’t dawn on me until the day that he died that I didn’t own a single solo album of his.  My twin brother, being the guitar player to my bass player growing up, was the one who hustled to build up the Holdsworth collection.  Granted, I do have a number of recordings that feature some of his playing: Planet X’s Quantum, Pierre Morelin’s Gong’s Time Is The Key, The New Tony Willams Lifetime’s Million Dollar Legs, Bruford’s Feels Good To Me, Stanley Clarke’s If This Bass Could Only Talk, Chad Wackerman’s Forty Reasons, Jean-Luc Ponty’s Individual Choice (Before someone asks, I’ll definitely get my own copy of Enigmatic Ocean one day), and the first UK album.  I don’t know if guilt is the right word for not owning some of his solo album because there are many of them that had gone out of print. Either way, I’m not even sure how much money he’d make off their sales. Probably none at all as I would likely have to find second-hand copies.

Just over a week before his passing, it turns out that there was a 12-CD box set featuring a number of his albums. The Man Who Changed Guitar Forever! got it’s title from the cover headline on the April 2008 issue of Guitar Player magazine.  It’s not quite career spanning, but it’s close. It may not include any of his work with Soft Machine, Tempest, or some of the previously mentioned gigs, but you get the lion’s share of his solo work, which due to his creative control over the content, is likely the best representation of who he was as an artist.  It leaves off Velvet Darkness, his first solo album, but he was apparently not a fan and wished it had never been released.  I actually dig it.  It features an impressive cast of musicians, and with some rare acoustic guitar pieces in “Floppy Hat”, “Kinder”, and “Karsey Key”, showcasing another side of Allan.  I only wish it didn’t take his passing to bring the box set to my attention. 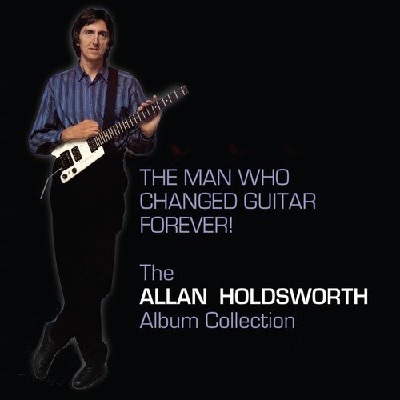 I’m looking forward to getting this CD set in the mail because I can now explore the albums my brother and I never had the chance to fully explore: Wardenclyffe Tower (the title is a Nikola Tesla reference, a man my father greatly admires), Hard Hat Area, Flat Tire: Music For A Nonexistent Movie, and the live album Then! It breaks my heart to see some people selling this set at rather high prices. It goes against the reason of this release in the first place. Individually, prior releases of his albums weren’t exactly cheap, so this set lets people get their hands on them with more ease. Mine came to just over $150 CDN with the shipping, so spread out over 12 albums, I’d consider that a fair price. I’ve seen multiple sellers listing this set on eBay at over $200, one copy even going at around $500. I’d hate to think recent circumstances have anything to do with that price tag.  I remember stores stocking up on George Carlin CDs and DVDs when he died.  They likely arrived at their price of the box set by adding up the prices of each album individually on a site like Amazon, and going with that.  That doesn’t make the practice any less shady.

I count myself extremely fortunate to have seen him in concert five years ago. It was a rather low-key gig, which took place at Cosmo Music in Richmond Hill, Ontario (just north of Toronto). I’ve already stated that he’s a guitarist’s guitarist, so there’s no venue more appropriate for his performance than a store that sells musical instruments. On top of that, Canadian guitar hero Kim Mitchell was among those in the audience.  His trio that evening featured bassist Jimmy Haslip and drummer Virgil Donati.  Aside from a few complaints by Holdsworth over the bright lighting on the stage, the show went off without a hitch.  Some photos were uploaded on social media following the gig.  I’m not sure who took them, but I hope they don’t mind if I share a nice action shot of Allan from that night.

I was coming off a rather long day, so we (my dad, brother, and I) rushed out of the music hall towards the car after the show ended. On the way out, we saw the start of what looked like a queue to meet the band.  At the time, we didn’t think much of it. My brother and I assumed the meet-and-greet privilege was reserved for those with a VIP ticket, much like it is in the case of many touring bands.  By the time we were kicking ourselves over the potentially missed opportunity, we were halfway home.

I can’t remember what kept us from inquiring any further about the lineup that had formed. I never know what to say when meeting someone who I admire, so maybe I was subliminally avoiding the situation, fearing that I’d say something incredibly stupid or (gasp!) annoy him somehow. Whatever the reason, I really wish I had reversed my decision. An autographed gig poster would have been a cool keepsake, but it’s the experience more than the signature that would have been special. I could have stood in that line and thought of something to tell him. Anything. He seemed a humble man, so perhaps I’d have to have found common ground with him and not just drop down and worship at his feet.  I’m a huge Star Trek fan, so a quick question relating to the TV show may have been appropriate (see “Mr. Spock” or his Atavachron album as to why).

At least I know that while I may never exchange words with some music idols of mine, the connection that Allan and those of his calibre can make with me through their art can more than compensate for it.  It appears that I’m not the only one that feels this way.  The comment section of the GoFundMe campaign started to help his family cover funeral costs makes for one of the most heartwarming reads I’ve seen in a long time.  Many people out there only passively listen to music, but for many others, music has the ability to enrich their lives at a deeper level.  Allan Holdsworth may not have been a musician that could pack stadiums with his tours or who would have his songs on mainstream radio, but for a man to persevere over a forty-plus year career, flying generally under the radar most of the time, while still managing to make such a positive impact on so many people, that’s one hell of a legacy to leave behind.

One thought on “Allan Holdsworth”