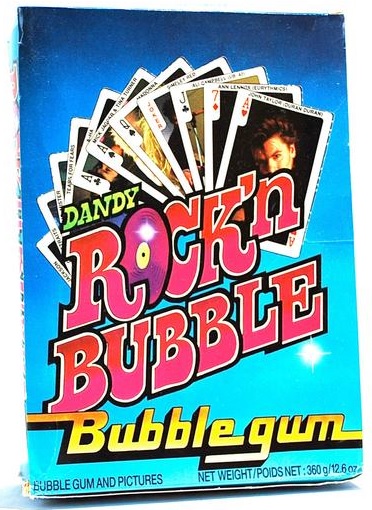 After completing a recent entry where I drew some music trading card designs, I got an itch to buy some old cards and rip open packs. I’m well aware that pretty much any cards I obtained as a child had little-to-no monetary value, but I’ve always found something satisfying behind the mystery of what can be found underneath a card’s wrapping, especially considering they are relatively inexpensive if purchased moderately. There have always been various outlets for trinket collectors out there that involve an element of risk-taking since a purchase may be partially unknown, and apart from trading cards, this continues to this day in the likes of blind-bag purchases (Lego Mini-Figures, Funko Mystery Minis) or subscription-based services such as Loot Crate.

In spite of the wide range of options, trading cards were one of my first forays into collectibles, so that’s where I recently returned. First, I found a box of some cool superhero cards (1992 Impel D.C. Cosmic Cards) from which I completed the entire set, but I was curious to see if I could find some music cards to have something to share on these pages. Thanks to a seller on Etsy that specializes in vintage toys from the 60’s through to the 90’s (Wonderland Toys), I was able to find some. I used to think of Etsy as a store to purchase homemade items and arts & crafts, but there are a large number of vendors that make it feel more like an online flea market because you never know what you can stumble across. Among the bundle of trading card packs I ordered were packs of Dandy Rock’N Bubble. 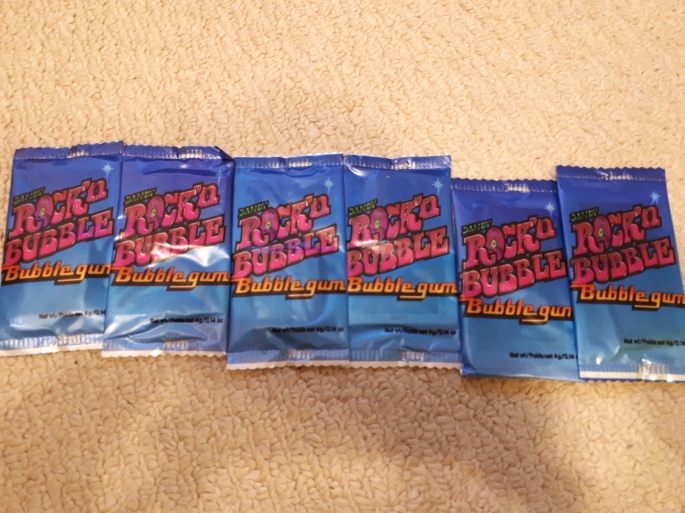 The wrappers that the gum and cards were encased in make no reference to the cards whatsoever. The display box did, but the wrapper speaks of the gum only. And that’s putting it lightly since the back of the packaging lists nothing but ingredients, making separate ingredients listings for the Australian and Finland customers. This seems to indicate that the gum came from different factories in different markets. I’m not sure which market my gum came from, but I gave it a good look, and ran away screaming. Thankfully, I had some old bubblegum in the Rambo packs I also ordered to compare it with. That gum was rather non-threatening, so having seen people on various card collecting Youtube channels try gum from old Topps packs, I manned up and sampled it. Surprisingly, the Rambo gum actually looked like gum, but smelled of nothing, and tasted of really bad nothing (the closest comparison would be licking an envelope). To contrast (see the picture below), the Dandy gum looked liked burnt fudge, smelled of death, and I dared not taste it out of fear of contracting a disease long thought wiped out of existence.

The interesting thing about the playing cards in these packages are their small size. While you would typically expect a 2.5 x 3.5-inch card, these Dandy cards are only 2 x 3 inches. That doesn’t sound like much of a difference, and they aren’t quite as puny as those cards that came in Humpty Dumpty potato chip bags, but they would make playing any actually card game slightly more awkward than normal. However, more confusing is the concept in general. Having to collect a playing card set three cards at a time is like having to build a jigsaw puzzle a few pieces at a time. I felt bad enough getting puzzle pieces inside a Kinder egg, but at least those came complete. It would be quite a frustrating process attempting to get a complete set of these cards, though I’m not sure how many people would have pursued these cards beyond getting their favourite rock stars in the set.

The front and backs of the cards are typically designed. The fronts feature a photograph of a musician or band (in portrait or landscape depending on the artist), and the backs show the same logo branding as found on the wrappers. A straightforward, non-abrasive design that is easy on the eyes. Speaking of which, here’s what both sides of the clean-cut Sting’s king of pain clubs card looks like. 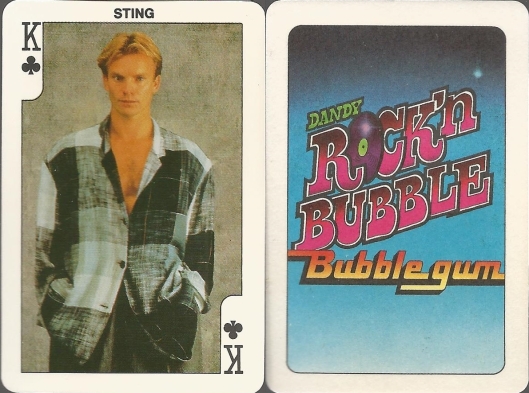 The trouble with the old packs of cards that included gum was that one card would always take damage as a result of the residue the gum leaves behind. Since only three playing cards came in a pack, that means that one-third of any card you acquire has an ugly, sticky stain on it. At least the seller warned buyers that this was the case in advanced, and there are likely some good home remedies to clean the stains off these cards if only partially. Thankfully, the seller threw in two extra packs to seemingly make up for the damaged cards. Unfortunately, I still managed to get a couple of duplicates. I’ve got an extra Billy Ocean and Paul Young for those looking to start a collection. No gum stains on either of them!

The cards are clearly from some time in the mid-1980s, but I don’t see an exact date anywhere. Many re-seller sites list these cards from 1986, while I have seen others list 1987. The country of origin of these cards is also difficult to pinpoint, but I was banking on being able to wager a good guess based on the more obscure of the rock and pop stars in the collection. The three cards that had me scratching my head in that regard were Nena (I forgot she did “99 Luft Balloons”), Sandra Kim (the youngest winner of Eurovision Song Contest at the time), and Modern Talking. Two German artists and a Belgian, so still no help there.

Some playing card sets have a bit of a hierarchy when it comes to ranking the people printed on the cards. For example, if you had a set of Happy Days-themed cards you might expect an ace to be The Fonz and one of the 2-cards to be Chuck Cunningham. I pulled two aces, with the ace of spades being shared by Mick Jagger and Tina Turner (they performed a duet during Live Aid), and the ace of diamonds being Mr. Mister. I didn’t get a 2-card, but the joker card I pulled features Julian Lennon on the front. Make of all that what you will.

The biggest surprise these packs revealed to me what that one card featured multi-instrumentalist Mike Oldfield, best known for his “Tubular Bells” composition that was used in the horror classic The Exorcist. The photo of him is an interesting choice, shown deep in thought contemplating of what his next epic will be. His inclusion was a shock to me since I never really had a sense of what his popularity was in the mid-1980s. It turns out his albums were still gold-sellers in multiple markets at the time. 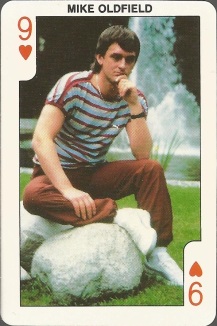 Another odd choice was that each member of UB40 seem to have a card in the set for some reason. This makes me believe that England, which is the band’s native land and where they experienced their earliest chart successes, was the country from which these came or else they may have opted for just one card for the entire band. Anyway, the two I pulled were brothers Ali and Robin Campbell.

The rest of the cards I got are relatively diverse stylistically, with the new-wave-pop-punker Billy Idol, smooth soul-singer Sade, progressive-pop act Supertramp, and the ‘Queen of Funk’ Chaka Khan to round out my haul.

In comparison to what exists in the entire set of 55 cards (52 standard cards and 3 jokers), my selection was actually a bit underwhelming. I’m sure that Michael Jackson card would be of the highest demand, but I would have loved to get the cards of David Bowie, Kate Bush, Tears For Fears, or Dave Gahan from Depeche Mode. And if you want to talk about missed opportunities, why wasn’t Queen actually on one of the four queen cards? They are still kind of neat, and I could always buy more because I’ve been satisfied with both orders I have placed with the seller in the past.

And speaking of that seller, I’ll be sure to share the other music card packs I bought from Wonderland Toys in upcoming posts.

(Edit Aug 15, 2020: I’ve since been informed of a fourth Joker card existing that doesn’t appear in the link I shared. Thanks to the reader for informing me of this Simply Red card.)