What can you say about a business that lasted for nearly one-hundred years that hasn’t been said already?

Plenty, actually. Businesses should be able to last decades so long as a consistent stream of clientele find value in what the business has to offer. Each customer has their own story, and I’m no exception. I can’t tell you how many times I’ve been to Wilson & Lee Music Store, but I can remember a great deal of what I have purchased at the store, and how they helped my family out over the years. I’d approximate the first time I walked into the store was around the same time that I started playing bass guitar as a sixteen-year old, which puts my relationship with their business to around 18 years in length. There’s plenty to recall over that time span, so if you’ll indulge me, I’ll share some of my own thoughts, experiences, and memories with you now.

While I have nothing but good things to say about this long-standing business, there is part of me that is frankly surprised that they weren’t forced to close their doors earlier. For anybody familiar with the city, the histories of Oshawa and the automotive industry in Canada at large are greatly intertwined. The death of the General Motors’ auto assembly plant has been a long and painful one that has impacted the community for (at least) much of the current century, with the final big blow in terms of job losses also occurring in December. Spending money on anything at all related to music is a luxury that a laid off work force doesn’t have the time for. Nonetheless, while business may not have been as booming as it had been when the city’s economy was stronger, and even though the music industry had been seeing steady declines in album sales since 2000, Wilson & Lee remained.

To most patrons that ever stepped through their doors on 87 Simcoe Street North, it’s not difficult to figure out why that is. Bill and Dave Wilson, not to mention the relatives and friends they employed throughout the years in temporary or part-time capacities, made up a highly-approachable and knowledgeable team that would use any and all resources they could to make the customer leave the store satisfied. I’ve been going to musical instrument store chain Long and Mcquade for around the same amount of time, but if I’m at all honest, I have always felt more of a stranger there. I’m not sure if it’s just that I value family more than the average person, but I believe there is something to having your name on your store’s signage that gives you more purpose as an owner. It puts the reputation of the store squarely on your shoulders, and the Wilsons certainly lived up to the responsibility.

It’s strange to me that while it was my foray into musicianship that first introduced me to Wilson & Lee, I only grabbed a single musical instrument from the store (the previously-discussed Squier Vintage Modified VI). However, a number of lesson books and instrument accessories came from their inventory, including the drum practice pad for the kit that I still dream of owning. My twin brother Alex, being the more dedicated musician of the pair, took more chances with the gear that was in their stock. He may not own the extremely-heavy SGH amp and cabinet any longer, but he’s been rather pleased with the Squier Precision he saw in your storefront that recently became the first bass in his collection.

One aspect of their store that was a blessing to this (at the time) young, aspiring record collector was their selection of second-hand vinyl. Prices varied as interest in LPs grew in recent years, but at the time, all records in the crates stored under the CD tables were $1.99 each. You had to sift long and hard through hundreds of pounds of gospel, obscure Canadian one-hit pop acts, and albums easier to find than an elf at the North Pole (four more days till Christmas!), but there were some goodies to be had. My earliest records were almost exclusively hard rock and metal, which was pretty much all I wanted in high school. Likely wedged between Englebert Humperdink and Nana Mouskouri records, my eyes partially bugged out of my head when sighting Sodom’s Better Off Dead. I wasn’t particularly targeting the band or album, but jumped at the chance to add more metal to the collection. It never showed up in any store I’ve attended prior to nor since that day.

I’ll likely be sharing more purchases from my time there in future posts, but two more are standing out at the moment.

One day, I made the sound decision to buy Alice Cooper’s Welcome To My Nightmare. As I was preparing to head to the cash register, I took a peak at the record and noticed it was actually Alice Cooper Goes To Hell inside of the sleeve. Fortunately, there was a second copy lying around, but I pointed out the mismatch to Bill (the album and movie guy). Doubting they had the matching cover for the misplaced record, he simply offered it to me for free. It may not sound like a grand gesture giving away two dollars worth of merchandise, but instances like this one were fairly typical. In the end, I ended up turning it down, telling him that I’d rather wait until finding a copy that has its proper package. Incidentally, I still don’t own Alice Cooper Goes To Hell, but not out of a lack of opportunity. Just never got around to it. I’m sure someone took Bill up on a similar offer if the mistake was noticed since I never saw that record there again.

The other record that was quite the memorable purchase for me was an ECM Sampler promo. This record, the eighth volume in the jazz label’s sampler series, included Steve Swallow, Eberhard Weber, Keith Jarrett, Ralph Towner, as well as Chick Corea and Gary Burton (as a duo). I’ll likely discuss ECM records further someday, but this record in particular went a long way in getting me familiar with jazz artists I had yet to explore in any depth (Keith Jarrett) or never heard at all (Eberhard Weber). Even if I purchase the entirety of featured recordings from this sampler, I may feel compelled to hold it as something of a unique (though not rare) item. On the other hand, it may be a good gift for a friend who is looking to discovering the so-called “ECM sound”, as this helped me immensely.

My parents had a great relationship with the business as well. They would always head to the Wilsons around Christmas time when it came to presents for my brother and I, which they did as recently as last year. My father, as I was reminded by Dave, worked part-time for them briefly to help with some of their repairs. However, the Wilson & Lee memory involving my dad that actually did stick in my mind occurred just after he received triple-bypass surgery twelve years ago. He wasn’t yet medically cleared to drive himself anywhere, so my brother and I met him at the hospital to take the bus with him home. Someone suggested that we make a pit stop, and we did so at our beloved music store. Oshawa’s public transit system doesn’t run that frequently, but was even worse back then, so having to wait longer for transfers home was a great annoyance in normal circumstances. In this case, all I was thinking about was how thankful I was that my dad was given a second lease on life, and made the most of the pause between buses to enjoy each other’s company. In fact, I still remember my purchase from that day, The Ultimate Kansas 2-CD set. I no longer own that compilation, but I will always own the memory associated with it.

When clearing out old stock, regular shoppers got the opportunity to find items that had been long buried in stock for years, and another visit shortly before their clearance period in their final month yielded a copy of Joe Jackson’s Live in Tokyo concert DVD. I wasn’t able to go down to the store closer to their last day in business (December 21st, the day I’m publishing this piece), but did manage to make one last round of purchases a few weeks ago.

Here is my final haul from Wilson & Lee:

and found something neat for the twin,

As a further keepsake from the business, I may leave some of the price labels on these pieces. They used to package purchases in paper bags with the store name, address, and phone number printed on them, but I don’t think I have any in my apartment.

The coverage of their retirement gave them minor celebrity status throughout the Golden Horseshoe area of Ontario, and they seem to be appreciative in seeing familiar faces and new visitors who wanted to catch a glimpse of their proud establishment. Regulars know this already, but it wouldn’t take long for a first-time customer to discover how passionate both Wilsons are and how quick they are to flex their knowledge of music and even cinema history (most movie store owners today wouldn’t know The Dead End Kids from The Ritz Brothers). They are always good for a story, and their closure announcement had them telling many. It’s also important to note their skill for conversation extends to topics far beyond their wares. I recall a good one from years back where Dave, the go-to Wilson for musical instruments, colourfully expressed his distaste for aspects of hockey play-by-play announcer Bob Cole’s game commentary. There was never a shortage of things to discuss.

That is, until my last day in the store.

I did talk a bit, but did feel somewhat tongue-tied, trying to find words to tell them how grateful I was to have had this business, their stellar service, and simply having them as people in my life for nearly twenty years. Endings don’t always happen the way you want them to, and it felt odd walking into their store and seeing the shelves nearly half-empty, but aside from that, it didn’t feel much different from any other visit to the store. It wasn’t jam-packed with customers (I don’t recall seeing any more than eight at any given time in recent years, which I chalk up to the swing away from brick and mortar retail), but stories and pleasantries were exchanged with loyal visitors just like they always had. If I’m completely honest, it was hard walking out of those doors knowing that it would be my last time.

What words couldn’t say at the time, this poorly-taken selfie… well, it probably doesn’t say much either, but it was fun being able to stand behind the counter for a change. 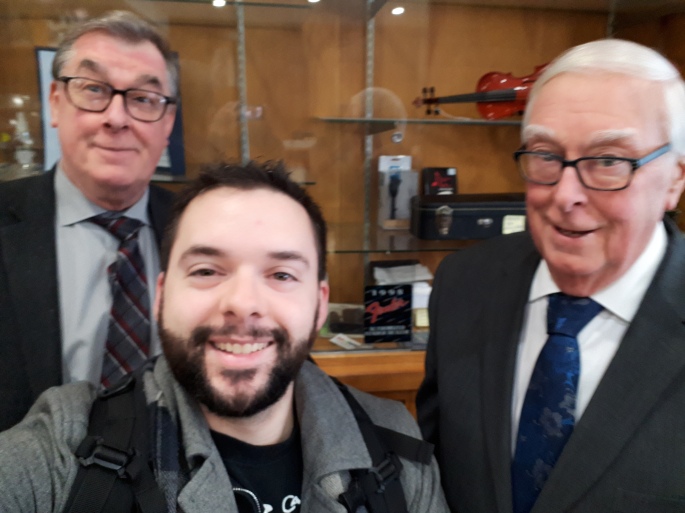 Thanks to Bill and Dave Wilson for being such great custodians of your family business for the latter half of its ninety-seven-year existence. Downtown Oshawa won’t be the same without Wilson & Lee’s presence.