How can an adult still obsess over 2 ½ by 3 ½ inch pieces of paper?  I can’t quite nail it down.  I view it partially as a link back to my childhood, and partially as a way to learn a thing or two about something.  When it comes to sports cards, collecting them can give you a deeper appreciation about the history of a sports league or sometimes forgotten facts about a favorite team (such as learning that Hockey Hall of Famers Jacques Plante and Bernie Parent briefly shared goalie duties for the Toronto Maple Leafs in the early 70s), and can serve as an amusing reminder of players who may not have lived up to their massive hype (sticking to hockey, I’ll namedrop Alexandre Daigle and Patrik Stefan).

I’m not as interested in non-sports trading cards for the most part, but having a pulse that aligns to the beats of the Bonhams and Blakeys of the world, a set featuring music in some form will often get my attention.  I’m not the sports statistics buff that I used to be, but I seldom turn down the opportunity to learn about musicians, even some I don’t listen to if their story seems interesting enough.  Music cards can occasionally serve as that jumping off point in expanding my knowledge.

I’ve deliberately searched for music-themed trading cards in the past, but my discovery of this set came completely out of the blue. I went to a local sports card store that I only recently learned existed, and had hopes of finding some interesting rookie cards or ones of players from my favourite teams.  After sifting through stacks of cards about to give up hope in finding much worthwhile, this ridiculously retro-looking box caught my eye as I was about to leave.

Twenty dollars may not sound like a honey of a deal, but if you give any consideration to eBay pricing, I could easily have spent at least three times the price had I gone that route.  Would I recommend paying those kind of prices?  Not really, but it’s a neat little purchase if you shrewdly bargain hunt.

It’s nice for the prospective buyer that you at least get to see the top card of the pack, which can assure you that if buying one individually, you will take at least one non-duplicate card home with you.  The design wouldn’t exactly a subject worthy of an arts degree thesis paper.  The cards edges are rounded like those in a deck of playing cards, which I think is their best quality.  While this makes for more difficulty in dinging the corners when shuffling through them, the poorly cut edges take away from the smooth appearance.  But dwelling on such concerns any longer falls under nerdy collector-speak, and that ain’t rock n roll.

For such a small set of 108 cards (minus two set checklist cards), variety is easily one of it’s strengths.  While pretty much everybody included in this set was a household name when it was released (1985), you get a good mix of pop and rock icons who were dominating the MTV screen time.  Want something with a heavier edge?  Get your hands on the Ozzy Osbourne and AC/DC cards.  Do you have pop sensibilities?  You’ve got the Thompson Twins and Wham for that.  Something your parents could enjoy? Save them the Huey Lewis and The News and Hall & Oates cards.  And where are the ladies?  Patty Smyth and Pat Benetar await your selection. 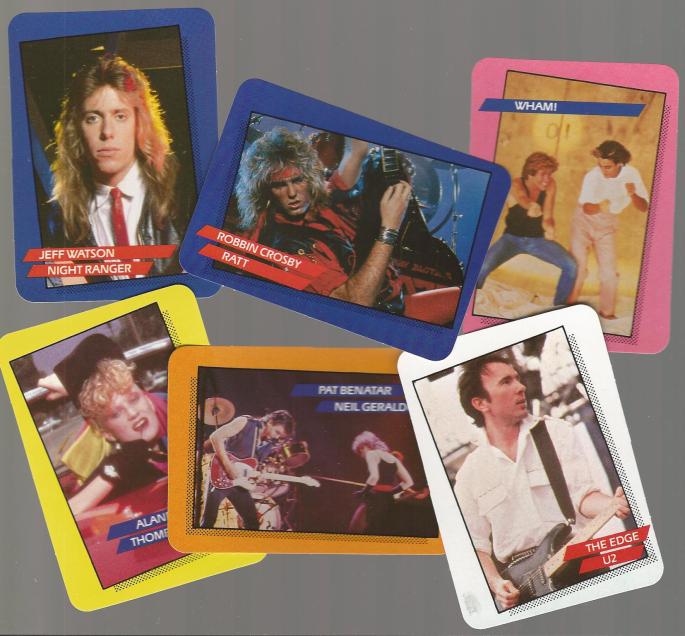 The way my luck is, I could not complete an entire set of these cards.  Not only that, I’m missing two of the cards that would arguably be the most popular in the set: Mick Jagger and George Michael.  If you have purchased virtually any box of trading cards that is at least 20 years old, you’ll find that as little surprise at how poorly the cards are randomized in each pack.  Most cards come in the same sequence pack after pack, so you’d likely need to buy two boxes worth to get the whole set, and even that isn’t guaranteed.  This left me with a stack of duplicates that outnumbered the ones I held onto to compile a set.  That tends to be why I often avoid packs and boxes and just target cards I want.

The backs of the cards tell a good story about each musician and band. Learn of the extensive music background of Police guitarist Andy Summers, Loverboy vocalist Mike Reno’s love of cooking and Monty Python, or Steve Pearcy of Ratt’s dashed racing aspirations.  You also get the all the vital information of their birthdate and birthplace, hometown, and their musical instrument.  Pre-Wikipedia, these cards would have made for a great starting point for some kid’s research.  My best discovery on the back of one of these cards?  A reference to Ozzy bassist Bob Daisley’s old band, Chicken Shack, some great heavy British blues I’d like to get my hands on one day.

The backs of band cards differ slightly from those of the individual members.  They include a checklist for all band member cards at the top, and a brief write-up, followed by a discography featuring official albums and singles.  Some cards of more established artists, such as The Rolling Stones, do not list their singles alongside their albums due to a lack of space.  However, a band like Quiet Riot’s card lists all Slade’s their most-popular singles.

Each pack also contains a sticker with some sort of music-themed expression emblazoned across it.  I’m only one sticker shy of having all twelve.  Without digging for the answer, I can only hazard a guess that sticker #12 would read something as banal as “If it’s too loud, you’re too old!”, “Rock ‘till you drop!” or “I survived a Kenny Rogers concert, and all I got was this lousy sticker”.  Since they are much smaller than the main cards, I’ve crammed them all onto the scanner at once for your viewing pleasure. 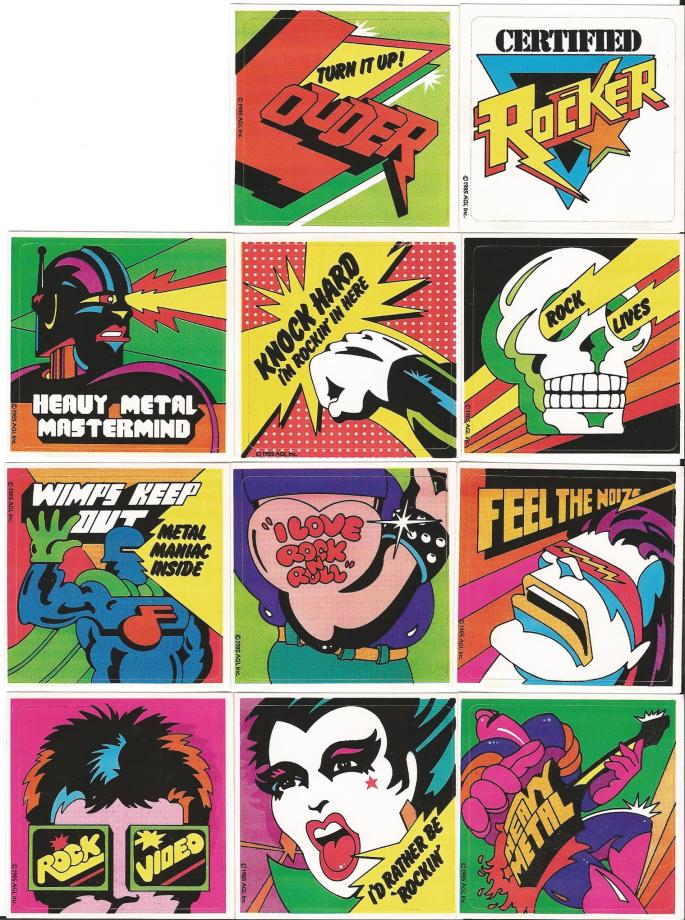 To finish things off, here are a few of my favourite images in the set. 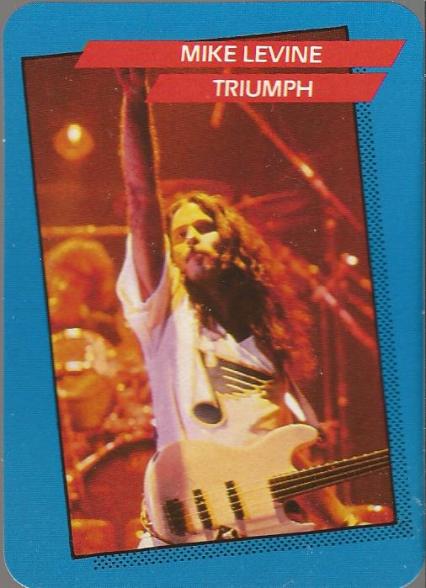 I went to the store to get hockey cards, and gosh darn-it, this is close enough! A great looking St. Louis Blues shirt on Triumph’s Mike Levine.

I bet he’s an absolute riot at parties.

Classic Rudolf guitar face! If I posed for a photo with him, I’d demand he make this face so there’s no mistaking him for someone else.

The only way to get more American than this photo give him a baseball bat, an apple pie, and some silicone implants.

Huey looks as if he has something else on his mind that’s distracting him.  Sports, perhaps.

Rock Star Concert Cards: Generically named, somewhat generically designed, yet I still kind of like them.  How about you?