Here’s another tale ripped straight out of Dream Land.  As some of you may have surmised by the title, to say I’m looking forward to seeing Slayer in a few weeks is an understatement.  While Jeff Hanneman is unfortunately no longer with us, Gary Holt is a more than capable replacement, as any fan of Exodus can attest.  There’s no better way to kick off a busy concert summer than by saying farewell to a band that have been consistently in my playlist since high school.

With all this anticipation building, this dream naturally took place on the day of the concert.  It seems odd to refer to an event in the future in the past tense, but I believe that is the correct phrasing, with the dream (which was experienced on the night of May 15) being the point of reference.  It began as a typical concert does with me, in the company of my most consistent concert companion (my twin brother), and arriving to the venue (Budweiser Stage in Toronto) via the GO Train.  The first event of note was rather untypical of my concert experiences, as I realized that I forgot our tickets at home.

In my 17-plus years of live music attendance, I have not once found myself searching frantically for tickets at the last minute.  This is a dream, however, and they have a way of bringing out the worst in me.  When I set out to go to a show, I make it my sole focus of the day.  The tickets will stay in my pocket from the second I wake up, checking in on them every hour or so to ensure that they didn’t vanish into the ether.  I don’t even like getting pre-drunk or high before a show like many attendees do, as I feel it would only dilute from my enjoyment of the show.  If the concert is on a weeknight in particular, I may get bouts of fatigue anyway, so why take anything to help increase those symptoms?

Fortunately for my brother and I, we had around 3 hours to go before the show began, so I had just enough time to take the train back, grab the tickets, and head back.  Everything had to run smoothly, but it would still be very much possible.  What would you place the odds on of this happening?  Heck, if the Vegas Golden Knights can advance to the Stanley Cup Finals as an expansion team, anything can happen.

We were making a quick decision between us as to who would make the trek back.  I somehow bared the responsibility of being the ticket guardian (I did order them, after all), so I stepped up to the plate.  Time was of the essence, and there was none to spare bickering about our dilemma.  Just as I was about to head home, we happened to run into two old buddies from our high school and college days.  These two would not have known each other in the real world, but here they were, inseparable bosom buddies.  No time to question this, as I left it up to Alex to catch up with these gents, while I played the role of the jerk and rapidly split.  The train back to Whitby was minutes away, so I had to hustle like Paul Newman in that movie whose title escapes me.

The train I desired was within site at the platform, so I began to increase my sprint even further.  Things were looking great, but my prospects then hit a snag.  Literally.  With every stride I took, I felt something was holding me back.  No, it wasn’t the old trope of having the sensation of lead feet, but I did consider the possibility that I transformed into a Dave Foley character mid-dream.  I turned around, and saw some woman, probably in her mid-to-late 30s, tugging at my belt.  She was with her two young children, who both looked as if I’d popped every balloon in existence.

To paraphrase, she told me bluntly that my pants kept falling down slightly, and my exposed butt crack was upsetting her children.  If this occurred in reality, my cheekiness would likely inspire laughter if anything.  There is much else going on in the city to distract from my modest plumber’s crack, be it the disgust in the smell of backed-up sewer, or the joy of encountering Toronto Batman should he return again to fight crime.  I didn’t even spend time debating her.  Rather, I just kept trying to forge ahead regardless of my circumstances.  With the blessed fortunes only nightmares can bestow, the train pulled out of site, and the dream ended.

No post is complete without some form of visual, so here’s my attempt to capture the frustration I felt while under this woman’s control.  First, allow me to explain a few things: 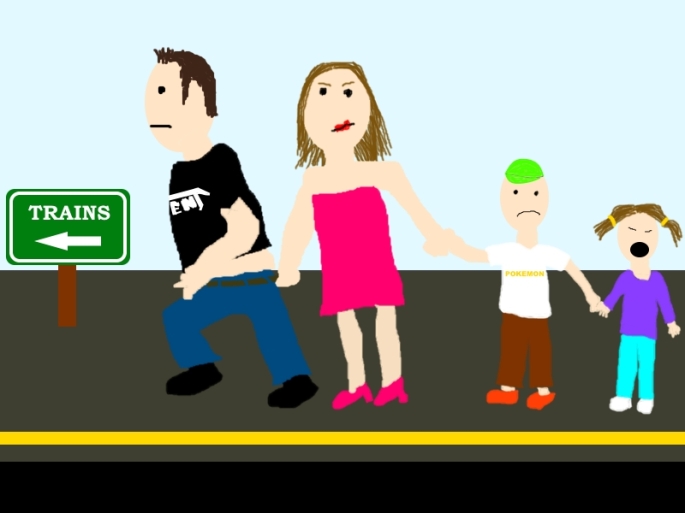 If I had total dream control, I would hope that things would have went a lot differently.  I swear I had that ability for a brief period of my childhood, but only used it to go on a Toys R Us shopping spree or something equally silly.  Why didn’t I simply undo the belt?  This would give me the satisfaction of reaching my destination while simultaneously mooning the mother who attempted to ruin my evening.  Like many of those Choose Your Own Adventure stories, most alternative paths lead to equally bad endings.  With that considered, I’d only fall flat on my face with my pants around my ankles like a certain disgraced latex salesman.